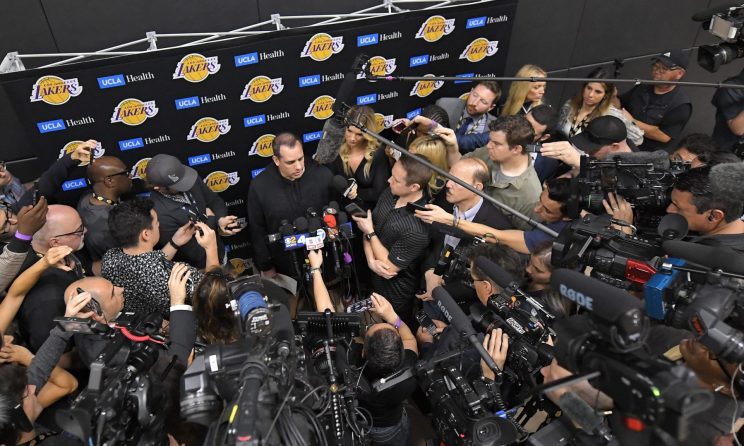 Every day in the NBA there is a lot to unpack, so every weekday morning throughout the season we will give you the three things you need to know from the last 24 hours in the NBA.

1) Vanessa Bryant, Lakers share their pain with the loss of Kobe. Understandably, it has taken time for the family of Kobe Bryant and the Lakers organization to make any statements on the death of Kobe, his daughter Gianna, and seven others in a helicopter crash last Sunday.

Wednesday that started to happen.

“It’s just strengthened what we’ve felt all year about our current group, which is we’ve become a family in a very short time. And it’s something you talk about in the NBA with your teams, but this group in particular has really grown to love each other very rapidly. And we understand the importance and the opportunity that we have this year, and this has just brought us closer together.”

Later, Vanessa Bryant — Kobe’s wife and Gianna’s mother — made her first public comments since the tragedy, posting on Instagram.

Near the end of the day, the Lakers’ organization released a statement.

We are devastated and have been forever changed by the sudden loss of Kobe Bryant and his daughter, Gianna. We send our love to Vanessa, the Bryant family, and to the families of the other passengers.

The Lakers will take the court for the first time Friday night at Staples Center against Portland.

The emotion of the loss of Kobe is still washing over the league. That was best evidenced by Kyrie Irving’s emotional postgame comments after the Nets beat the Pistons.

A couple of things to note. First, the NBA will not be changing the league’s logo to Kobe. Second, the investigation into the cause of the crash continues.

2) Damian Lillard gets his first career triple-double and does it in front of his nemesis, Russell Westbrook. I had two thoughts as I watched Lillard get that first triple-double.

First, he didn’t have one already? Technically I knew he didn’t, but it just felt like he must have done this already (same with Kawhi Leonard getting his first recently).

Second, of course he did it in front of Russell Westbrook. At this point, the smack-talking Westbrook may not want to ever speak around Lillard again, it just brings out the best in Dame.

Lillard had 36 points, 11 assists, and 10 rebounds against the Rockets his first career triple-double, which sparked the Blazers to a 125-112 win.

James Harden returned after missing two games with a thigh bruise but his slump continued, scoring 18 points on 5-of-18 shooting. Russell Westbrook scored 39 points, extending his streak of games with 20+ points to 21 games.

3) Knicks fans are frustrated — and they should be. Knicks scuffle at the end of the game, Marcus Morris then sticks foot in mouth. I get what Knicks fans are feeling. I am a supporter of Newcastle United in the Premiere League and I would put that team owner, Mike Ashley, up against any crappy owner in any sport (short of the insanely high bar Donald Sterling set back in the day). My Newcastle fandom allows me some insight and empathy. I know what it’s like to helplessly watch a lack of organizational direction, seeing what should be lesser organizations thrive while you tread water (at best), I get the losing wears fans down.

Meaning, I understand the fans chanting “sell the team” at Knicks owner James Dolan as he left New York’s loss to Memphis on Wednesday night.

Almost had a fight break out at Madison Square Garden between Knicks and Grizzlies. Elfrid Payton shoves Jae Crowder on a 3-pointer with about 50 seconds left and Grizz up 124-106. He’ll be hearing from NBA. pic.twitter.com/65kSzOHClc

It was a rough night for the Knicks and their fans. First, New York was blown out at home by the Memphis Grizzlies 127-106. (Credit to the Grizzlies, who 11-3 in January and improve to .500, sitting as the eighth seed in the West.) This loss carried weight because both of these teams are supposed to be rebuilding, but only one seems to be on a path back to relevance soon.

Then it got ugly. With less than a minute to go and the game decided, Memphis’ Jae Crowder stole a lazy pass from Julius Randle, then decided to keep playing hard and jacked up a corner three rather than dribble out the clock. Crowder kept on playing hard. New York’s Elfrid Payton took exception to that, ran over and shoved Crowder to the floor. Crowder bounced back up and went at Payton, and then others jumped in and what passes for a “fight” in the NBA was on.

Payton and Crowder were ejected, as was New York’s Marcus Morris for being the third man in. Payton can expect a suspension from the league for his sore-loser act — and him not remorseful after the game will not bring leniency from the league office.

Then after the game, Morris stuck his foot in his mouth when asked about Crowder.

“He’s got a lot of female tendencies on the court, flopping and throwing his head back…he’s soft, very woman-like”

Come on, this is not Mad Men era basketball. You can’t say that. Frankly, if the Knicks played with the fight of most players in the WNBA they’d have more than 13 wins this season. Morris backed away from those comments and quickly apologized.

I apologize for using the term “female tendencies” I have the upmost respect for women and everything they mean to us. It was a Heat of the moment response and I never intended for any Women to feel as though in anyway I’m disrespecting them. Again I apologize with my comments.

Expect the league office to hand down suspensions and fines in the next 48 hours.

BONUS THING TO KNOW: Victor Oladipo returned to the Pacers, hit shot to force overtime. Oladipo was back. The former All-NBA player had missed most of a year with a right quad tendon rupture, but he was back on the floor for the Pacers on Wednesday, and he was making plays. That includes hitting the three that forced overtime.

Indiana is in that tight bunch between 2-6 in the East (where 2.5 games separate five teams) and if Oladipo can get his legs under him and his form — if he can blend in with Malcolm Brogdon and Domantas Sabonis — Indiana might be able to break out of that pack and do some damage in the playoffs.