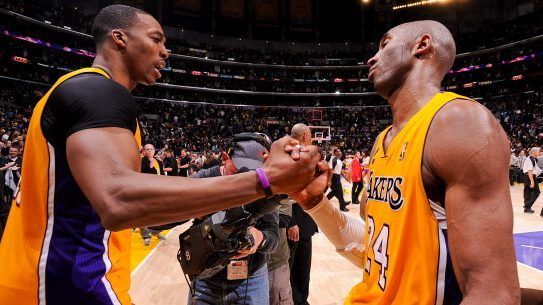 Dwight Howard and Kobe Bryant are not exactly blood brothers for life.

When Howard spent a season with the Lakers back in 2012-13 the two men clashed. To put it kindly. Kobe’s single-minded obsession with winning did not mix well with Howard’s “this needs to be fun — and where are the Skittles” mentality. Fans sided with Kobe while Howard — who pushed hard and came back too quickly from back surgery that season then never got right — became the scapegoat.

Howard is on a redemption tour, having won over Lakers fans this season by simply playing his role and keeping his head down (finally). Now that redemption tour is headed to the All-Star Saturday Night Dunk Contest.

Howard wants Kobe to join him — and is trying to get Laker fans to pressure Kobe to be part of the festivities. From Dave McMenamin of ESPN:

“I’m trying to get Kobe,” Howard said… “So if I can get all the Laker fans to lobby to get Kobe to help me in the dunk contest, that’d be really good. That’d be awesome.”

Sure, because pressuring Kobe and telling him he has to do something is always the best way to motivate him. Good luck with that.

To be fair, Kobe and Howard get along now, but I’m not about to try and predict Kobe’s next move.

Howard will break out gimmicks, props and tricks come Feb. 15 at the United Center in Chicago for this Dunk Contest. The only question is, will Kobe be one of them?

Warriors should scrap, scratch and kick to succeed in regular-season objective of avoiding play-in event